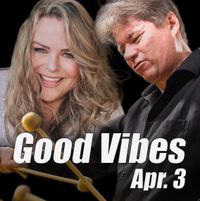 Lisa Donahey is coming back to Catalina Jazz Club and bringing some “Good Vibes.” It’ll be a night of vocals and vibes celebrating songs from the Great American Songbook and jazz standards. And when we say Good Vibes, we also mean that Lisa will be sharing the stage with accomplished vibraphonist/percussionist and drummer, Tommy Kesecker. Tommy is excited to be making his first appearance at Catalina Jazz Club. He has performed globally with Diana Krall, Zakir Hussain and the Rhythm Experience and Michael Feinstein among others. You’re in for a treat with Lisa, Tommy and a stellar band ready to entertain and make sure you’re feeling all the good vibes.

ABOUT LISA DONAHEY Lisa Donahey is excited to be back at Catalina Jazz Club and tonight she’s bringing something new and entertaining with “Good Vibes.” Lisa has captivated audiences throughout her native Southern California and beyond with critically acclaimed performances that tap into her passions for everything from classic Top 40 pop, R&B, rock, Great American Songbook and big band standards to musical theatre, country, novelty tunes, classical and even her own colorful mashup style, Jazzbaret. A consummate entertainer, Lisa does more than simply interpret the genius of others. She adds her own narrative flair to the flow of the music, turning set lists full of songs we know and love into fresh, poetic looks at life and love while making the crowd an integral part of the experience. Over the past few years, Lisa has created, produced and starred in a multitude of diverse large ensemble showcases such as her very own Just a Broad and a Big Band, Jazzbaret-Cabaret in a jazzy sort of way, Songs in the Key of She-featuring the top women vocalists in SoCal and her original Holiday Show Christmas in Our Soul. She is known throughout SoCal for her diverse and entertaining shows and has performed in sold out shows at many L.A. hotspots including her Show Just a Broad and Big Band, here at Catalina Jazz Club. Lisa can currently be heard in rotation on Sirius XM's Siriusly Sinatra and her holiday album Christmas in Our Soul, was in the top 20 on Billboard’s Jazz charts and this past holiday you could hear tracks from her album in rotation on Sirius XM's Hallmark Channel Radio.

ABOUT TOMMY KESECKER Tommy Kesecker has performed with a diverse array of highly acclaimed musicians, including pianist Larry Vuckovich's Blue Bulkan Ensemble, guitarist Jim Campilongo, Michael Feinstein, Diana Krall, Joel Grey, along with groups Echo and the Bunnymen and Mannheim Steamroller. Tommy Kesecker was a part of legendary tabla virtuoso Zakir Hussain and the Rhythm Experience, and made numerous appearances at the Monterey Jazz Festival, The World One Festival and San Francisco JAZZ. Tommy has played percussion for Spam-A-Lot, The Full Monty, Young Frankenstein, Dream Girls, Anything Goes, and Motown the Musical among others. San Francisco Chronicle staff writer Jesse Hamlin once referred to Tommy as "a cross between Milt Jackson, a Jamaican steel drummer and a Balinese gamelan player." His talent is not to be missed!